Twitter has open its Analytics Dashboard to every users. Is it the athlete's ultimate branding tool? Meh. 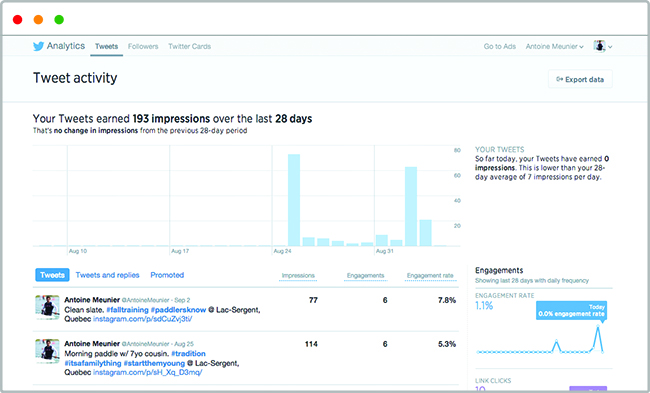 Medalist got access to the Analytics Dashboard earlier this year when it was first released for verified accounts and advertisers giving me quite some time to play around with it. I thought I'd give a shot at it using my personal @antoinemeunier account thinking I'd learn a whole lot and then in turn could share my experience in this article. Meh.

On thing for sure, making your way to the dashboard is dead easy, simply log in on analytics.twitter.com and you'll see something like the screenshot above. This one comes from my own account and upon a second look, strikes as a bit odd by the shape of it's data set, or lack thereof.

Indeed, the first two weeks of August aren't telling much. It would be natural to blame my poor tweeting habits during that period and come to the conclusion that I should have fixed the situation by unleashing the power of the RFTT.

However, it seems like Twitter may have only started to collect data from impressions and engagement rate metrics after it's public launch of the dashboard, leaving us in the fog for anything prior to mid-August. (As observed in the lack of data for every tweets posted before August 15th) 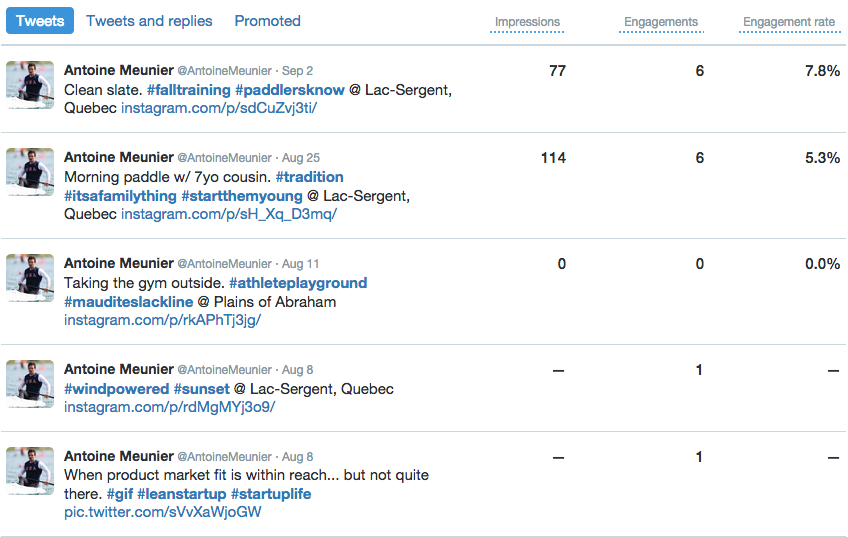 It would be quite a bit ridiculous to draw any conclusion from such a small data set that really consists of only two tweets but looking beyond the potentially cool looking graph, I'm not sure whether Twitter Analytics Dashboard succeeds at giving actionable feedback from it's metrics.

There is definitely a huge value for advertisers tweaking their advertising campaign trying to optimize every engagement. For the athlete looking for a clear way to improve her social game? Not so much.

Rather than go all analytical, go beyond the data and explore Twitter's parameters.

There is definitely more than meets the eye on the dashboard. It's worth spending some time exploring the dashboard to understand the relationship between tweets impressions, engagements and engagement rate which are in most cases far more valuable than the usual vanity metrics ( like, you know, how many followers you have).

Takeaways: Twitter Analytics Dashboard gives a broad idea of how you're performing but you'll have to do your part in order to extract clear actions to take in order to improve your social game.

I'll follow up in a month or two, once there is more data to look at, with a more analytical view of my tweeting performances and hopefully with the help of the Analytics Dashboard be able to emerge with some conclusion and best practices.